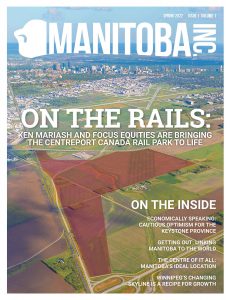 Manitoba Inc., sister magazine to Industry West Magazine, launched their first issue in March. This new magazine will showcase business and industry in Manitoba, celebrating local successes and sharing Manitoba stories. The CentrePort Canada Rail Park was featured as the cover story of their inaugural issue and the inland port was highlighted in one of their feature articles. Read more about Manitoba Inc. here.

Issue 1, Volume 1 Feature: The Centre of It All, Manitoba’s Ideal Location

CentrePort Canada’s President & CEO, Diane Gray, was profiled in the Spring 2022 issue of the Western Canada Highway News. Read the article on page 53.

Snow Lake Lithium announced the commissioning of a scoping study to assess a proposed lithium hydroxide plant in Manitoba. CentrePort Canada was identified as the location of the proposed plant.

“Finally, Winnipeg is gaining traction as an industrial market after being passed over for too long, and CentrePort Canada is a big reason why,” says CBRE Winnipeg Vice President and Managing Director Paul Kornelsen. “With next to no industrial vacancy in Vancouver, Toronto and Montreal, occupiers are looking for opportunities in other cities like Winnipeg. CentrePort Canada has put Manitoba back on everybody’s radar. There are great opportunities here at long last and more developable and serviced land to come.”

Article – How CentrePort Gave Winnipeg’s Industrial Market Its Groove Back

CentrePort was featured in the ‘Growing the Economy’ supplement by the MHCA in the April 9, 2022, edition of the Winnipeg Free Press. Read the article on page 5.

CentrePort Canada’s Diane Gray was a featured speaker at the Fields on Wheels conference hosted by the Transport Institute. Read more here.

Set to soar: new aviation museum preserves roots and opens gateway to the future by: Vanessa Desorcy Sometimes the most innocuous of questions can be a catalyst for the most remarkable of endeavours. When Doug Emberley asked his father,... Read More