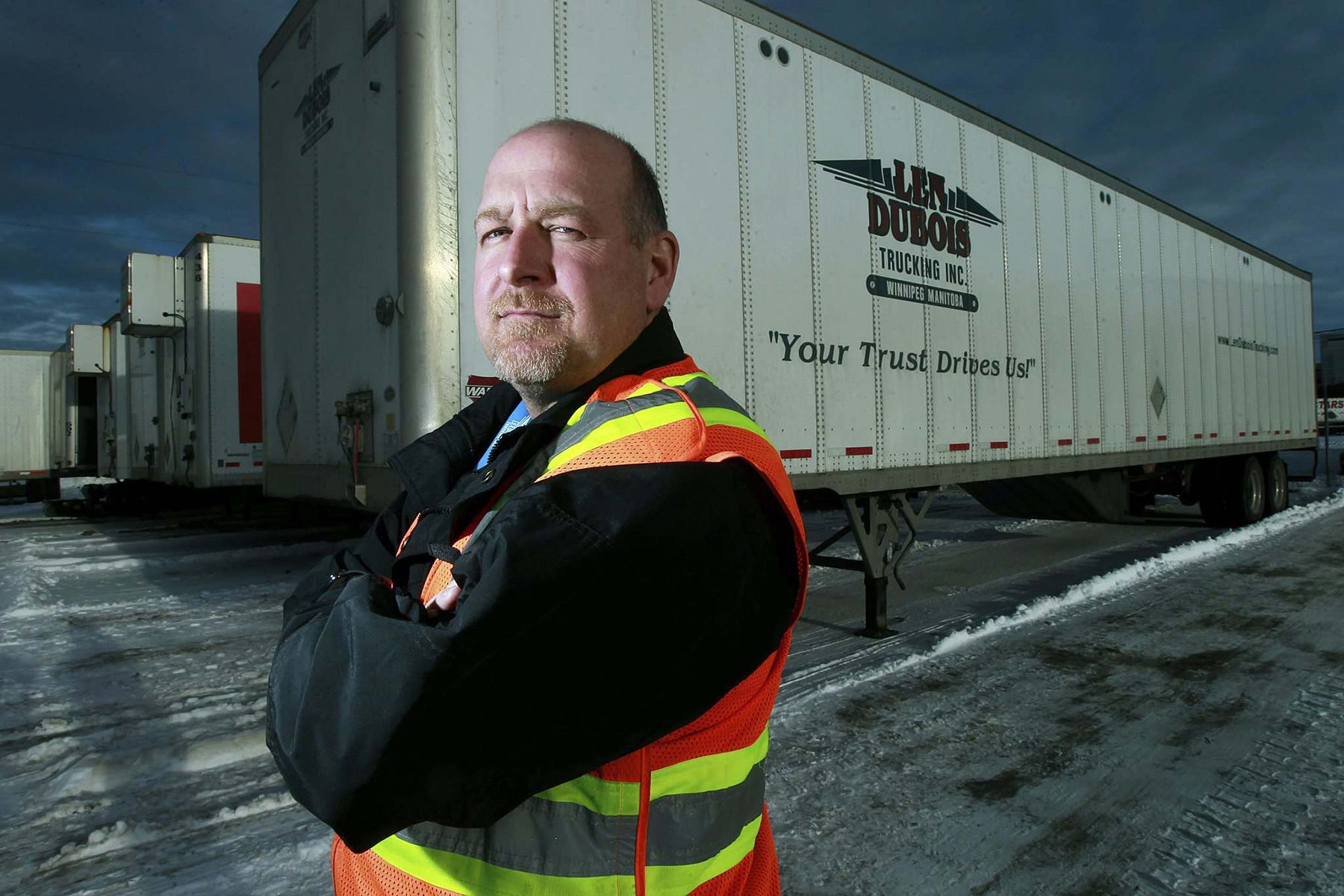 CentrePort home base for some of country’s largest trucking firms

When it comes to CentrePort and the concentration of the trucking industry in the northwest quadrant of the city, it’s one of those chicken and egg scenarios.

Yes, some of the largest trucking companies in the city were already located within the CentrePort footprint when the inland port was being conceived.

And now that the CentrePort Canada Way highway has been built and more industrial land has been developed the 20,000 acre region makes even that much more sense for transportation companies and their suppliers to be there.

Jason Dubois has been looking for about five years for a property to replace the too-cramped Elgin Street location off McPhillips Street that his company, Len Dubois Trucking, has outgrown. He remembers when they moved there in 1998 they thought they would never out-grow it.

As the company’s fleet grew from 13 to 70 trucks — and as McPhillips Street became busier and with frequent construction projects making it even more awkward to move around — Dubois wanted to relocate to CentrePort where about 70 per cent of the trucking industry already was.

“One of the reasons we were looking at Centrport is that it makes better sense for our egress in and out of the city,” said Dubois. “It’s better for our customers and it’s easier for our drivers coming and going out of the city. Also, we believe there will be cost savings for us as well.”

It so happens the property Dubois is acquiring — west of Brookside Boulevard and north of Inkster Boulevard — is the current location of another trucking firm, Saskatoon-based T & T Trucking Group. (That business will move from 40 Bryan Bay to 56 Bryan Bay.)

Before CentrePort was even a concept, the footprint already contained of some of the country’s largest trucking firms like Bison Transport, Paul’s Hauling and TransX.

Meanwhile, Freightliner recently announced its intention to build a brand new showroom and operation in CentrePort doubling the size of its current Winnipeg location.

Freightliner’s new location will be in Brookside Industrial Park Phase III, the 89 acre industrial park that started marketing its fully serviced land in the early summer. Stephen Sherlock, a vice-president of Cushman & Wakefield Winnipeg, said they are in the process of finalizing three conditional sales and then then entire set of parcels will have been sold, maybe in record time.

“We had high hopes for the project,” he said. “We thought it would sell out quickly. We had a sense the market demand was there.”

Another Winnipeg trucking firm 4Tracks Ltd. — that already operates out of a trucker-friendly Eagle Drive location of CentrePort — just acquired a 40 acre parcel of land right next to CentrePort Canada Way and plans to build a dramatically larger operation.

Jas Brar, the owner of 4Tracks, said even though its current location on eight acres was built in 2011, his company has massively outgrown it and plans to be able to build facilities like cross-docks with enough space for some warehousing.

“It’s a big investment, but we are growing.” he said.

Like many other sectors, trucking faces some uncertainties with an on-going demand for drivers, carbon tax issues and trade dispute hangovers. But by all accounts the industry did have a good year last year.

Terry Shaw, the executive director of the Manitoba Trucking Association said the location of even more firms in CentrePort is a natural occurrence.

Diane Gray, CEO of CentrePort, is gratified at the kind of demand for space in CentrePort that the market is showing. With the Brookside Phase III project selling out so quickly and with another fully service industrial park now on the market north of Inkster Boulevard called Brookport, she is keen to see the demand continue.

“The CentrePort land base was chosen because it was a natural location to build an inland port due to the proximity to the airport, rail lines and obviously, the trucking industry,” she said. “What we are excited about is the opportunity to continue to grow that base and to have other companies make CentrePort their home.”