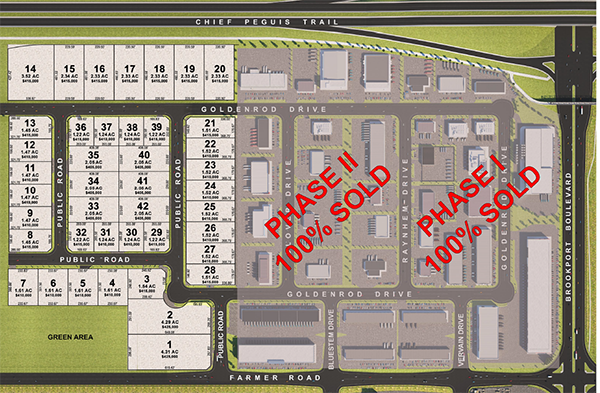 The new $42-million industrial park is being developed by Whiteland Developers (“Whiteland”). At market launch, more than 80% of the 42 lots were pre-sold, with the remaining lots selling quickly. 17 companies have acquired lots within the park and are set to invest more than $75 million on construction. Companies who have purchased land in BrookPort include those within warehousing, distribution, cold storage, transportation and truck parts.

“Since bringing Phase I of BrookPort to market in the fall 2018, demand for fully-serviced industrial land has exceeded supply, with most lots selling before officially hitting the market,” said Satpal Sidhu, President, Whiteland Developers.

“We are excited to welcome more than a dozen new companies to BrookPort and are looking ahead to the development of the final phase of this park in the near future,” said Amrit Jhand, CEO, Whiteland Developers.

BrookPort Phases I and II, totaling 170 acres of fully-serviced industrial land, sold quickly. More than 25 companies are in active development with facilities now operational or under construction. Established operations include Merit Functional Foods and Nutrien.

“We are continuing to see incredible demand for fully-serviced industrial land in CentrePort,” said Diane Gray, President & CEO, CentrePort Canada Inc. “Since 2019, over $330 million in building permits have been issued for projects in the R.M. of Rosser lands at CentrePort and we anticipate this strong pace of growth to continue.”