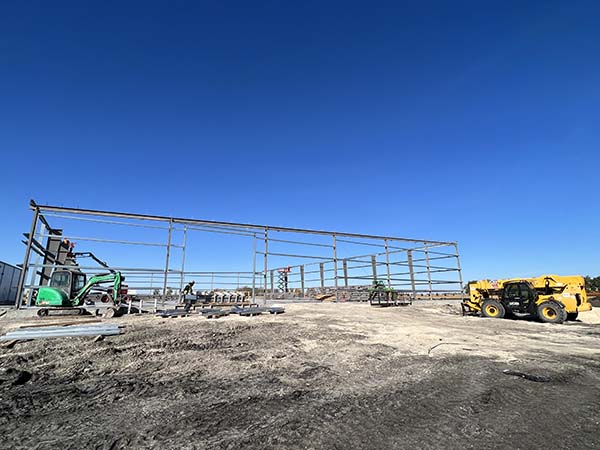 CentrePort Canada Inc. is pleased to announce over 600,000 square feet in new construction is underway at the inland port. Close to $70 million worth of building permits have been issued this year by the South Interlake Planning District for new projects in the Rural Municipality of Rosser (“RM of Rosser”), in the area known as CentrePort North.

“Manitoba is open for business and we are thrilled to see this significant development move forward that will play an integral role in our province’s long-term economic growth,” said Deputy Premier and Minster of Economic Development, Investment and Trade, Cliff Cullen. “Our government is pleased to work collaboratively with CentrePort and all business and industry leaders to create the conditions to make Manitoba more competitive, foster job creation, incent investment and spur economic growth, now and well into the future.”

Highlights from construction and development in 2022, include:

“Being located in CentrePort Canada has given us the space and opportunity to grow our business,” said Kurt Shmon, President, Imperial Seed Ltd. “We opened our doors in the summer of 2017, with plans to grow and expand our operations over time. Our business has grown faster than we anticipated, and we are so excited to be moving ahead with this expansion of our cold storage facilities in order to better serve our global customers.”

“Over the last five years, we have seen over $350 million worth of building permits issued within the R.M. of Rosser in CentrePort,” said Diane Gray, President & CEO, CentrePort Canada Inc. “These projects have dramatically changed the business and economic landscape, bringing new companies and jobs to the CentrePort footprint. As we look ahead to 2023, there’s more excitement to come – the inland port will continue to grow and evolve with the initial construction of the CentrePort Canada Rail Park and several new industrial business parks will be announced in the coming months.”

Development activity shows no signs of slowing down with more major projects on the horizon, including the servicing of City of Winnipeg lands within CentrePort, the development of a 500-acre residential area, and the construction of the 665-acre CentrePort Canada Rail Park in the RM of Rosser.