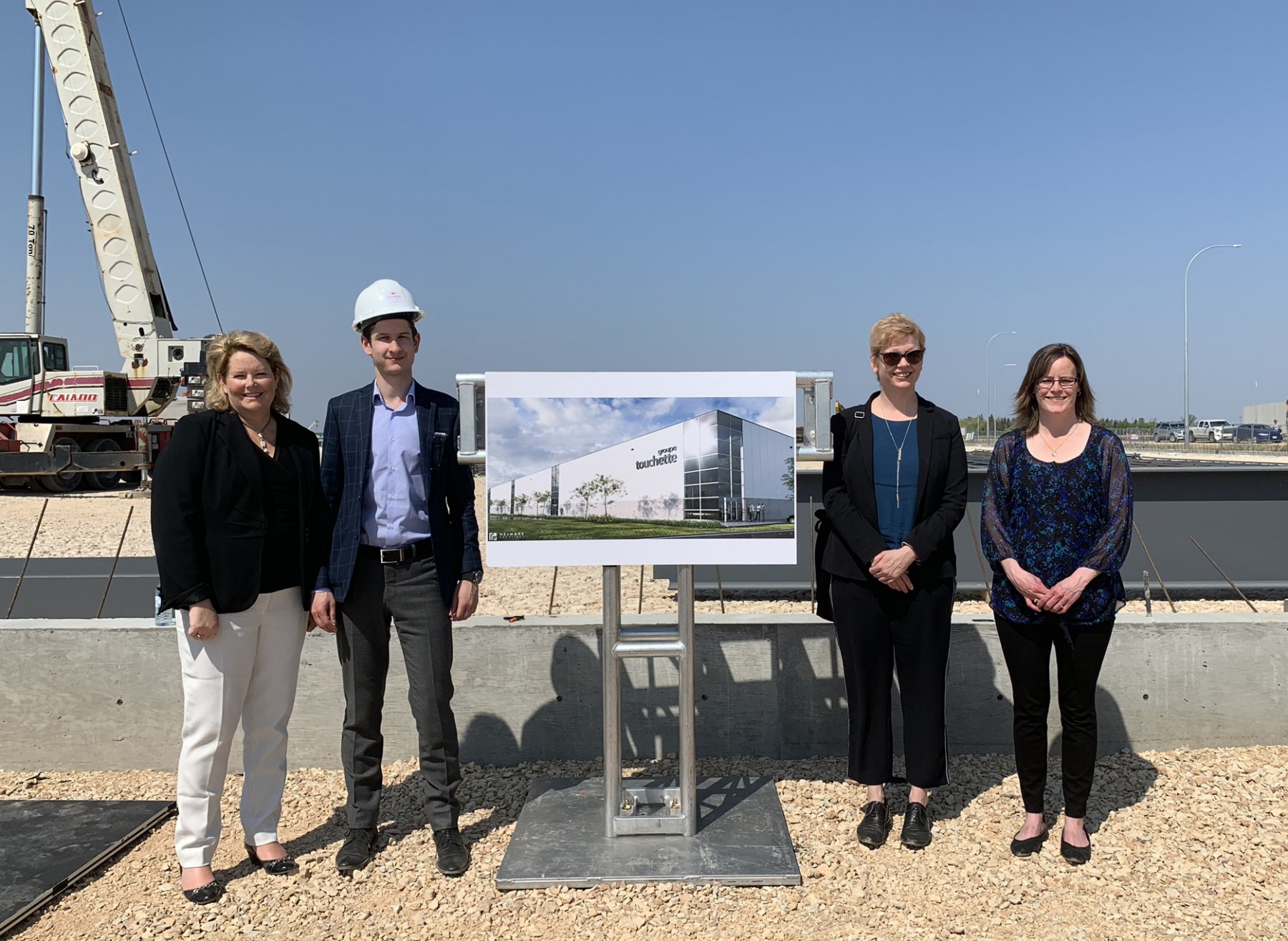 We Love This Market: Construction is booming at CentrePort, the latest being a $20-M, 100,000-sq.-ft. tire warehouse.

The industrial version of a new housing subdivision is taking place right now south of CentrePort Canada Way, with steel frames instead of wood and buildings as large as 100,000 square feet instead of 2,000-square-foot homes.

At least four industrial buildings are visibly under construction effectively across the road from each other in a field southwest of the intersection of Route 90 and CentrePort Canada Way in Brookside Industrial Park Phase 3.

The developments are part of a 17-lot, 96-acre industrial park that sold out in less than a year for prices of at least $350,000 per acre.

That’s almost 10 times the price paid for land by the first new tenant in CentrePort back in 2006.

Standing in front of a backdrop of construction sites, including a just-announced $20-million, 100,000-square-foot building for Montreal-based tire distributor Groupe Touchette, Centre-Port Canada CEO Diane Gray said this is the port’s busiest construction season ever.

“This time last year, if you looked around this area all you would have seen was empty fields and ‘lots for sale’ signs,” she said. “But with long-term planning completed by the RM of Rosser and with major infrastructure investments that have been made over the last 10 years, we have seen a flurry of private-sector investment at CentrePort in the last year.”

The activity now taking place at this industrial park and a handful of others within the CentrePort footprint is the manifestation of what was only a concept when CentrePort was originally being discussed a little more than 10 years ago.

Some questioned the construction of a highway that effectively bisected the 20,000-acre inland port before any substantial development had taken place.

But Dale Klein, CEO of Edmonton-based Canada West Limited — which bought 30 acres a year ago in the same industrial park and has two multi-tenant buildings under construction and another scheduled to begin construction in 90 days — said the proximity to the highway is fantastic.

“Transportation is so good for the trucks coming in and out. They can be on the Trans-Canada heading west in no time,” he said.

Klein is so confident about the market and the demand for modern industrial buildings in the area that he is starting construction of 50,000-square-foot buildings before he has signed leases, something virtually unheard of in Winnipeg. He expects to invest about $60 million over the next 24 months in building out his 30-acre property.

“We love this market,” he said. “The RM of Rosser is fantastic to work with, there is no business tax here… We really think it is a competitive advantage.”

Groupe Touchette, the largest Canadian-owned tire distributor, is building its 38th distribution centre in the country. It has been in Winnipeg for less than 10 years and this is the third time it has moved to larger facilities.

“In the history of Winnipeg’s surrounding municipalities, there has never been a more successful development,” said Martin McGarry, CEO of Cushman & Wakefield Stevenson, the property firm that marketed the industrial park for developer Crystal Properties. But it took a lot of time and effort to get to the point where there was actually any supply to satisfy the demand.

But it took a lot of time and effort to get to the point where there was actually any supply to satisfy the demand.

“Things are going very well in the industrial real estate market in Winnipeg, but you can’t have economic growth or jobs without shovel-ready inventory,” he said.

In addition to Touchette and the Canada West buildings, a 78,000-square-foot Freightliner dealership is rising from the prairie and more buildings are scheduled to start construction this summer.

And then there is the anchor tenant of the industrial park, the National Research Council’s $60-million Factory of the Future project, which is about to issue tenders for construction.

Gray said the journey to reach this level of development intensity has been lengthy. “When I started less than 10 years ago, CentrePort was just a concept — that the business community could use its geographic location and transportation assets as an economic development tool.”

Since then, the highway was built, a water treatment facility was built in Headingley and a utility was created by the RM of Rosser, which then had to negotiate a shared services agreement with the City of Winnipeg. Then Hydro, gas and fibre optics services had to be brought in.

“Now we’re at the point where the private sector is responding,” she said. “Crystal Properties was the very first developer ready to go. They were willing to front-end load those servicing costs with an agreement with Rosser and take some of the development risk and they put the project on the market. The industry responded and it sold out rapidly.”