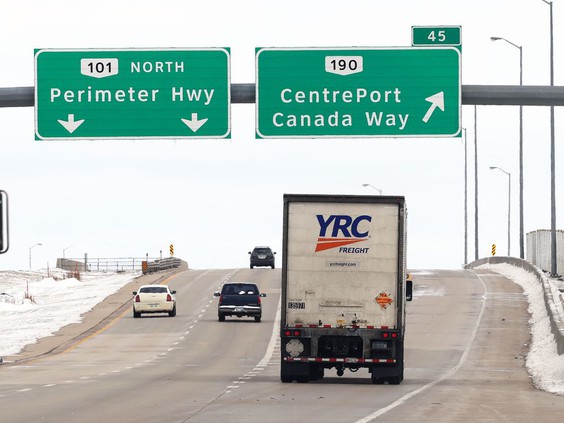 ALDRICH: City needs to invest in opportunity at CentrePort South

You can stand outside the new Merit Functional Foods plant, look east and be staring out at the City of Winnipeg.

In one breath it is a vision of what the future can look like for industrial development, while in the next it’s a look at lost opportunities for the city when it comes to maximizing economic investment.

The sparkling high-tech canola protein plant resides in CentrePort North, which has seen hundreds of millions of dollars in investment in the last decade and is a part of the RM of Rosser. A few hundred metres to the south lies CentrePort South which falls in the City of Winnipeg.

While there are grand plans for CentrePort South, there has so far been zero new investment in the more than 2,000 square acres since the land was designated more than a decade ago due to the lack of water and sewer service to the area. Until that investment is made this critical piece of economic land will not even be an option for companies looking to build their own infrastructure and facilities.

This isn’t about competing with Rosser, as a high tide floats all boats, but Winnipeg’s northwest is not even in the water. While there are jobs being created for Winnipeggers at Merit, the company’s property taxes and other economic impacts are going to our neighbour, not here.

Again, good for the RM, but this is just an example of the type of business development that is not even considering Winnipeg and there is a lot more coming down that pipeline.

There are a number of projects also lined up for the south for when the infrastructure is built, including a 500-acre residential area and a 300-acre expansion of the airport’s west side campus.

To be fair, developing an inland port on the scale of CentrePort does not happen overnight, a lot of leg work has been done to get CentrePort to this point. But the progress of the two halves of CentrePort does stand in contrast to one another, especially as we head to someday trying to emerge from the economic catastrophe that is the pandemic.

This is not just about COVID recovery, this is about the future capacity for growth of the city. According to the recently released Complete Communities 2.0 draft, the Employment and Commercial Lands Study has identified a significant shortfall of serviced industrial land to accommodate growth forecast for the next 20 years, compromising the competitiveness of the city and the region.

The cost to put the infrastructure in is not clear. A previous report pegged it at about $70 million but a new study is expected in the coming weeks which will better outline this estimate. The city will also be seeking federal and provincial support on the project, as all three levels will benefit from this development.

Scott Gillingham, the chairman of the city’s finance committee, said the biggest reason the budgetting for this project has been delayed has been competition from other infrastructure projects, specifically the North End Sewage Treatment Plant. But it is needed, nonetheless.

“People move to communities that provide job opportunities and they move away from those that don’t,” said Gillingham, who is pushing for the prioritization of the project in future budgets. “If we want to ensure that we attract investment and job opportunities in our city in the future then we need as a city to work with the province and the federal government to invest in water and sewer in CentrePort South.”

The sewage treatment plant in and of itself also impacts potential future growth of CentrePort and the capacity of the system. CentrePort North is already tied into that system.

You know what would help pay for those needed investments to the sewage treatment plant? The economic impacts of a developed CentrePort South.

If the city is serious about growing to one million people and bouncing back from the pandemic, they cannot afford to continue to kick this can down the road.